The Iowa Caucus for the Democratic Nomination Is One Year Away - February 3, 2020 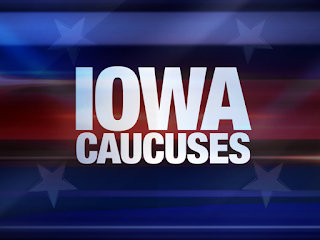 The 2020 Presidential Race for the Democratic Nomination for President is scheduled to formally begin 365 days from today.

The Iowa Caucuses are scheduled to take place on Monday night, February 3, 2020.

As of today, 8 Democrats have formed announced the formation of exploratory committees -- which are tantamount to announcements for the Presidency. You can keep track of announced candidates here on the Wiki site.

The three candidates with the most polling support, Joe Biden, Bernie Sanders, and Beto O"Rourke, are expected to make their decisions knows in the next 60 days.

Iowa's main role will be to whittle down the large number of Democratic candidates who survive through the New Hampshire primary the following week.

The Republican caucus situation is less clear because of Trump's incumbency.

Posted by Eddi Haskell at 12:20 AM No comments: