O'Rourke has been moving up in the polls and is now 6 points and 2 points behind the well known Cruz in two recent surverys. These poll numbers are surprising, since O'Rourke has limited name recognition behind his own district in far west Texas. Ted Cruz, Texas's Senator since 2013, has wide name recognition in Texas and nationally as a Presidential Candidate and right-wing opponent throughout the Republican Primaries against Trump in 2016.

O'Rourke speaks fluent Spanish (by all accounts better than Mr. Cruz who has Cuban ancestry), and has staked out very progressive positions on social issues for cannabis legalization, reproductive rights, and LGBTQ equality which show that deep red Texas may be returning to its moderate Democratic Party electoral traditions.

O'Rourke is charismatic and looks good in cowboy boots. In addition, he can raise a ton of money nationally. This race, and Florida's,  where incumbent Democrat Bill Nelson is defending his seat against Republican Governor Rick Scott, are the two battlegrounds which will command national attention this fall.

For more about the Texas Senatorial Race:

Posted by Eddi Haskell at 9:46 PM No comments: 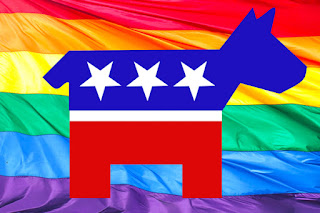 A record number of open LGBTQ Democrats are favored in hotly contested election races on November 6 for Governor or Senator.

I am not mentioning every Democrat running for electoral office. For example, democrat Lupe Valdez, who is a lesbian and running for Governor of Texas, is not mentioned here since she is not favored to win her election race against incumbent Republican Governor Greg Abbott. I am mentioning candidates who are given at least an even chance in current election polls.

In addition, a record number of open LGBTQ candidates (almost all Democrats) are running for the U.S. House of Representatives. The final tally on November 7 should see the current number of 6 increase to over 10 open LGBTQ congressman.

Posted by Eddi Haskell at 10:09 PM No comments:

Make no mistake about it - a Democratic win here will send shockwaves through the national political establishment. As we wrote earlier, this district should not be competitive for any Democrat.

For more information on the Monmouth Poll:
https://www.monmouth.edu/polling-institute/reports/monmouthpoll_oh_080118/
Posted by Eddi Haskell at 8:32 PM No comments: