The Nation is Wrong. Going Hard Left Will Be Suicide For Democrats in 2018 and 2020. Let's Look at One Major Piece of Evidence Why


The Nation is one of the oldest (1865) and most respected progressive (or left wing) periodicals that has been continuously published in the United States. You can read about their rich history of associations with progressive writers and luminaries here; they were on of the first notable national publications to endorse Bernie Sander's campaign in January 2016.

Our first piece of evidence concerns a Gallup poll on the subject of who Americans will vote for for President by group identity.

Gallup is the best known pollster in the U.S.A.  Although this poll is three years old, these views change slowly over time.

Socialists are the most unpopular group.  They are the only group that more Americans would not vote then would when asked. 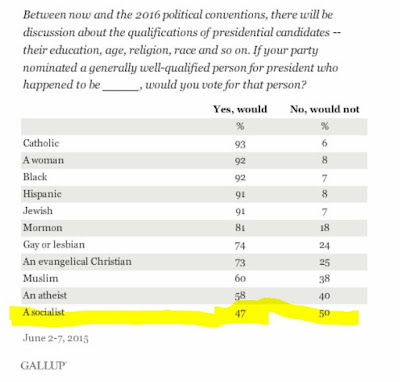 In order for Democrats to take control of the House in 2018, they must win 23 districts that are now Open or in Republican hands in suburban and rural areas. It is not beyond logical comprehension to assume that these voters will not respond well to the term "Democratic Socialist" as party identification --- especially when Trump remains popular in red state areas.

In addition, Democrats must defend sitting Senators in the following states that voted for Trump in order to have a chance of taking over the Senate, and win open seats in the red states of Arizona and possibly Tennessee.

Moving hard left, and adopting Democratic Socialism,  may play out in places like California, New York City, and Vermont, but could prove disastrous for Democrats in other area.
Posted by Eddi Haskell at 3:17 PM No comments: 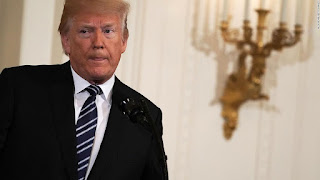 Get ready for another possible political earthquake. And this one is slipping through the cracks.

On Tuesday, August 7, another special Congressional election is happening in Ohio in District 12.  And an unknown 31 year old Democrat might pull an upset.

This is a heavily Republican district. The seat is open because the Republican Congressman of 18 years resigned to take a job leading The Ohio Republican Business Roundtable.  Republicans have represented this district in Congress every year since 1939 except for a period of 2 years from 1981-1983. 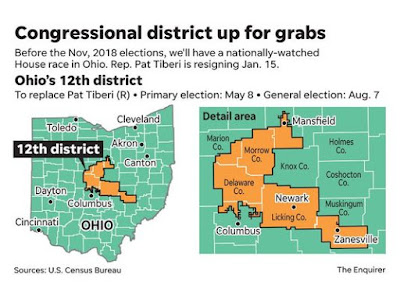 Danny O'Connor, a 31 year old political unknown is running against a well known local Republican politician, Ohio State Senator Troy Balderson, and has made a race out of it. One has estimate O'Connor  ahead in early voting according to returned ballots. Polling shows an even race, with the momentum to O'Connor.

This race has been ignored by the national media for the most part, unlike recent races in Georgia and Pennsylvania.

Make no mistake about it. If Danny O'Connor wins this race, Republicans are going to be petrified. They should win this seat. Donald Trump carried this part of Ohio by a wide margin in 2016. Pat Tilberi, the Republican, won reelection here with over 66% of the vote in 2016. Any Republican loss is going to be seen as confirmation of the upcoming "blue wave" against Republicans in November.

I think the Republican will win, simply because it is so rock-ribbed Republican.  I can't see a 31 year old Democrat winning. But stranger things are happening in politics right now.

Posted by Eddi Haskell at 2:31 AM No comments:


35 U.S. Senators (out of 100), along with the entire House of Representatives, are up for election on Tuesday, November 6.

Control of the Senate will be important for Democrats since whichever party runs the Senate will be able to do things like tie up judicial nominations, including those for the Supreme Court, and refuse to vote on legislation, like that with narrowly saved Obamacare from being overturned by a hostile President Trump. A Senate run by the Democratic Party can also do things like investigate, alone or along with the House of Representatives, any issue (such as Russian Interference in the Election) it so sees fit.

The U.S. Senate is narrowly controlled (51-49*) by the Republican Party.  Democrats need to pick up 2 seats in order to take control of the Senate, since Vice President Mike Pence would cast a tie vote in the event of a 50 - 50 tie to elect the Senate Majority Leader.

However, despite some optimistic estimates to the contrary, control of the Senate will be very difficult for the Democratic Party, if not statistically impossible given current polling numbers, and the fact that only two of the states which have "swing" Senatorial elections (Nevada and New Jersey) did not vote for Trump in 2016.

These 10 states are now close.

There is a near certainty that Democrats will need to win 9 of the 10 States to take control of the Senate.

Based on an analysis of the 10 closest states, I am predicting a 50 / 50 Senate split. I think Democrats will win 8 of these close races.

One thing that can potentially harm incumbent Democratic Senators in conservative red states is the upcoming vote over the SCOTUS appointment of Brett Kavanaugh. Incumbent Democratic Senators Donnelly (Indiana), McKaskill (Missouri), Tester (Montana), Heitkamp (North Dakota), and Manchin  (West Virginia) are in a damned if a you do / damned if you don't situation on the vote,  since President Trump remains personally popular in their socially conservative state, putting pressure on them to go along with his pick. If they vote to confirm Kavanaugh, they will alienate their progressive Democratic Party voters -- and may have many sitting out the election, or voting for a third party as a result. The retirement of SCOTUS Justice Kennedy was almost certainly planned by a clever Republican Party with this predicament in mind.

If this happens, Mitch McConnell would remain Senate Majority Leader, and the Republican Party would retain the narrowest control of the Senate due to that tie vote Vice President Pence would cast for overall control.

This actually happened once before, in 2001. One liberal Republican Senator, Jim Jeffords of Vermont, actually shifted control of the Senate to the Democrats (under President George W. Bush) by becoming an independent and voting with them. Perhaps history will repeat itself -- and  Republican Senators Susan Collins of Maine or Lisa Murkowski of Alaska will do the same. But we are jumping ahead of ourselves right now.

Here are the 10 close states, and my current projections.  This assumes that President Trump's popularity is continuing to take a hit due to his odd July performance visa-vi the entire issue of Putin and Russia which is dominating headlines right now.

(Note - Incumbents are marked as Senators)

Favorites are in red.

New Jersey:  Senator Robert Menendez (D), Robert Hugin (R)
(note: Menendez is only 2 points up in one current poll in what should be a safe Democratic seat).

*Note - Two Independents, Bernie Sanders of Vermont and Angus King of Maine vote as Democrats in Senate organization, and should be counted in all but name as Democrats.

Posted by Eddi Haskell at 12:02 AM No comments: