I just left this comment over at Daily Kos as Eddi Haskell and am running this here as a Prediction.


This campaign has very short news cycles. The current “email scandal” news cycle, which broke on Friday, will last until tomorrow afternoon. By Monday evening I will take bets that at least two of these will dominate the headlines 1. Kurt Eichenwald’s new investigative piece on Trump will be out (he says on Twitter it will be released on Monday morning and that it was written before the Comey letter and suggests a fairly major revelation) 2. Comey will be forced to (excuse my french) “crap or get off the pot” and explain why he just interfered with a Presidential election or resign 3. William Weld will formally resign from the Libertarian ticket and say that there is no way he can see continuing a candidacy that may help Trump become President (and shut Johnson up — who contradicted him last week from hinting at this) 4. Someone will stick their neck out and risk a debilitating law suit and release a damning tape of Trump that will show him either using language such as the “n” word or saying something else that will serve as further impetus to get the Obama coalition to the polls — or a similar tape that is currently being withheld or 6. a total complete surprise, perhaps a Trump connection to Putin that can be proven or SOMETHING. But by tomorrow night this email thing will be small potatoes. You can count on it.
Posted by Eddi Haskell at 2:07 AM No comments:

Reality Check: This is How Donald Trump Can Win the Presidency In A Close Election -

As of right now, the polls are tightening, and Hillary Clinton's email troubles are again a campaign issue.

Donald Trump can continue to defy predictions and win the presidency in a close election.

He can lose the popular vote, like George Bush #2 did in 2000 - but secure just enough electoral votes by carrying states and one congressional district in Maine that are too close to call in current Real Clear Politcs voting projections.

Note that Maine is one of two states (along with Nebraska) that assigns electoral votes by Congressional District. Trump can win by one electoral vote according to this map if he wins Maine's Second district, a conservative rural district, where he is polling even with Hillary Clinton. However, even if he were to lose that, and the election were tied 269 electoral votes each, Congress would decide who becomes President and the Republican candidate would be favored, a situation that has not happened since 1876.

For Donald Trump to win the presidency, he must carry Florida and Ohio. I do not see him winning without these two states. And even if he carries these states, he is not assured of a win.

Conversely, if early election returns show Hillary Clinton losing Pennsylvania, it is going to be a long election night for her. Although she can win the presidency without any one state, Pennsylvania should be considered her foundation state for a victory.

Note - This is not a prediction.
Posted by Eddi Haskell at 11:44 PM No comments:

What Explains The Huge Disparity In National Presidential Polls? Can Trump Still Pull Off A Come From Behind Upset Win?

What explains the huge differentiation in current reliable polling for the U.S. Presidential election on November 8? Although Hillary Clinton is maintaining an average lead of 5.4% (as of October 27), individual polls show a lead of anywhere from 1 - 14%.  What explains this variation?

Besides sampling error rates, modeling differentiation in voting projections explains much of the numerical variation.  The uncertainty about whether or not certain groups are going to show up and vote in the same total percentages as the last two Presidential elections also adds to the uncertainty about an ultimate victory for either Hillary Clinton or Donald Trump. Although Hillary Clinton should win, with odds overwhelmingly favoring her and the Democratic Party, there still is an outside chance that Donald Trump can pull off an upset victory.

The big questions are will the Democratic Coalition that turned out in such strong numbers in 2008 and 2012 to elect and reelect President Obama be sufficiently motivated to turn out to overcome what appears to be a very motivated base of white men without college degrees who, according to polls, are preferring Trump by 3-1?

As Michael Moore so bluntly said, will the FU vote (slang words that I will not print here) that has shocked the establishment in other countries (i.e., Brexit in the UK) show up in the USA and shock just about everyone all with a Trump victory? How motivated are the people at Trump rallies to show up at the voting booth, and how motivated are progressive voters who formerly supported Bernie Sanders going to be to show up to vote for Hillary Clinton?  This is the bottom line -- and why the 2016 election still remains somewhat of a wildcard.

Can Donald Trump pull off a come from behind win?  Sure he can.  It is unlikely but do not write him off yet.

Posted by Eddi Haskell at 12:48 AM No comments:

Reality Check: What Would a Hillary Clinton Landslide Look Like on November 8?


Election day 2016 is less that three weeks away.  What would a Hillary Clinton landslide look like in terms of electoral votes?

My prediction today is that there is a 25% chance that Clinton will gain at least 375 electoral votes out of the 538 available.  I am also predicting that Utah's 6 electoral votes will go to Evan McMullin, a third party independent candidate who is currently leading in recent polls. He will be the first third party candidate to carry a state since Dixiecrat George Wallace carried five southern states in 1968.

Texas remains a possible Democratic gain -- Hillary Clinton is only 4% behind Donald Trump in one recent poll. However, I do not think Texas will vote Democratic this year. I may be wrong -- if Trump continues to collapse in the polls. Texas is seeing a big rise in its Latino population and may become a purple state by the 2020 election.
Posted by Eddi Haskell at 12:29 AM No comments: 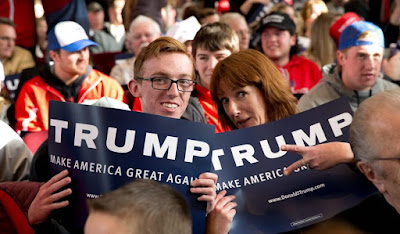 Although Donald Trump is now running a 5% deficit against Hillary Clinton according to the latest Real Clear Politics average of major polls, he still is leading among self-identified white voters by a wide margin.

Let's look at one poll for detail -- the Fox News poll that shows Hillary Clinton and the Democrats ahead by 7% points. Although Fox News is identified as a right-leaning news organization, their polls comes close to the Real Clear Politics average of major polls. The poll is conducted among 1006 interviewees which gives enough of a sample base for a projectable result with a tolerable margin of error.

White Men Without a College Degree:

This explains why Trump is doing so well in Iowa - "blue" state in Presidential elections that has voted for President Obama twice, and has a  relatively low minority population. It also explains why North Carolina and Arizona, traditionally Republican voting states in Presidential elections with growing and diverse non-white populations are finding themselves more competitive for the Democratic Party this year.

Reality Check: Donald Trump's Campaign For President is Over Unless He Shows Up For the Second Presidential Debate on Sunday Night 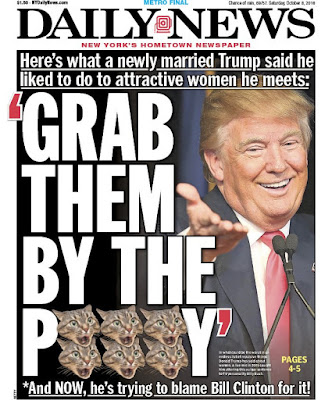 Donald Trump is currently reeling from the most damaging day in his checkered Presidential campaign. There is no way to spin his videotaped boasting of attempted rape in 2005 to a member of the Bush family. Although Mr. Trump has apologized for his conduct, his apology is not being accepted his own party which seems to be in a mad rush to repudiate him - especially those who are in close election races.

Mr. Trump is being pressured to withdraw from the race. He is refusing to do so. Even if he does, he will still appear on the ballot as the Republican candidate for President. Mike Pence, his Vice President, will presumably pick up his electoral votes is he does withdraw from the race but the process for replacing a candidate at this late date is unclear.

At the time of the writing of this post, there are reports that Mr. Trump may cancel his appearance in tomorrow's Town Hall Presidential Debate.

Mr. Trump must show up. If he does not he will plummet even more in the polls than can be expected at the current time.  If there is one thing that voters will not tolerate it is a President who cannot handle pressure.  It would be better for Mr. Trump to spend 90 minutes apologizing to the American public than not show up for the debate at all.

If Mr. Trump attacks President Bill Clinton, and by extension, Hillary Clinton, for similar actions in the past --   instead of apologizing for his own behavior --  all he will do is further destroy his standing with female voters.  Trump's voting base has shown that they are resistant to any negative reports on Trump in the past, but boating of sexual assault is pushing the limits of acceptability.
Posted by Eddi Haskell at 5:10 PM No comments:

Reality Check: The Presidential Race All Comes Down To Florida Once Again 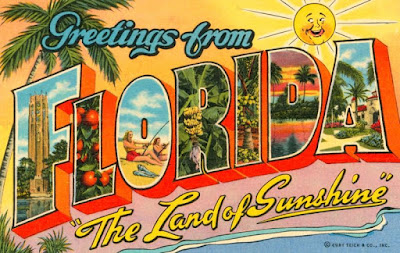 Can Donald Trump win the presidency without the swing state of Florida and its 29 electoral votes? It is highly improbable. Once again, Florida moves into its role as the one state the Republicans must win if they are to win the Presidency.

I put together one scenario where Donald Trump could win by one electoral vote without carrying Florida . It involves carrying two states where Hillary Clinton is ahead in today's Real Clear Politics average of major state polls -- Pennsylvania (4.4%) and New Hampshire (6%), and Colorado where Clinton is ahead by 3.3%.  Pennsylvania is trending heavily in Clinton's direction -- she is up by 9 and 10% in the two most recent polls, as is Colorado where Clinton is ahead by 11% in two recent polls. The odds of Trump winning all three, and one of Maine's congressional districts,  are improbable at best.

Hillary Clinton has a very narrow lead in Florida in the average of major polls -- under 3%.  Both candidates will be investing time and ad dollars here, more than in any other state. But the message is clear -- Donald Trump cannot win unless the Sunshine State votes his way.

Posted by Eddi Haskell at 8:52 PM No comments:

Reality Check: Trump Can Still Win the Presidential Election. The Polls Remain Remarkably Close with a 2.5% Difference between Trump and Clinton 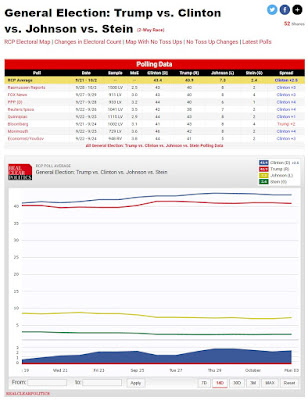 Many analysts have already written the election off and declared Hillary Clinton the winner of the 2016 Presidential Election.   Donald Trump has had one of the worst weeks in any US. presidential campaign, including a terrible debate performance and the revelation that he probably has not paid income tax for 18 years by applying tax loopholes.

Many factors can come into play in the remaining five weeks of the campaign. This election is far from over.

Posted by Eddi Haskell at 1:20 PM No comments: