Reality Check: It Ain't Over Until Its Over: Get Ready For Presidential Debates Round 2 and 3 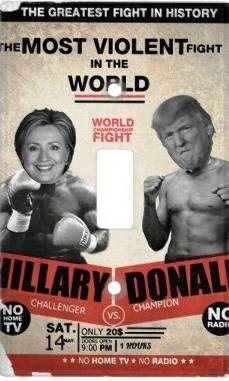 Hillary Clinton absolutely clobbered Donald Trump in last night's first 2016 Presidential Debate, the most watched political debate in U.S. history, on Monday night. Over 84 million Americans watched the debate on televsion, and millions more tuned in on live web streaming. People who watched at bars or at restaurants were not counted -- making the actual audience much higher.

However, Trump has two opportunities to make up for his poor performance in the next two Presidential Debates:

There is also a Vice Presidential debate on Tuesday October 4, but these tend not to be game changers and as important as the Presidential debate. Joe Biden's debate with Paul Ryan in 2012 was an exception though -- he gave confidence to wavering Democrats who were disheartened by President Obama's lackluster performance in the first debate against an inspired Mitt Romney who beat expectations and performed well.

American voters tend to be forgiving in debates -- and if Trump can "come back" after suffering a near "knock-out blow" by Clinton (to paraphrase boxing terminology) he might restore some of the momentum he seemed to be gaining in September before the debate  This is, of course, assuming the polls reflect what the "conventional wisdom" assumes will be a Hillary Clinton gain in the polls which is not at all assured given this most bizarre of election years in the United States.

This also assumed the "October Surprise" that many Democrats fear will not be sprung against Hillary Clinton by Wikileaks's Julian Assange or Vladimir Putin's Russian hacker army does not dominate the news cycle.
Posted by Eddi Haskell at 11:00 AM No comments:

My Forecast For the Presidential Vote As Of Today 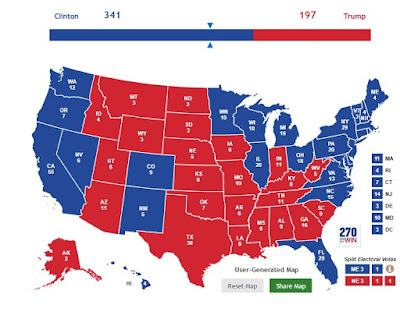 Note: Numbers do not add up to 100% because of rounding)


Posted by Eddi Haskell at 7:35 PM No comments:

Hillary Clinton continues to remain the favorite to win the U.S. Presidential Election on Tuesday, November 8.

The Electoral College Map above shows the states where each candidate holds a clear advantage in state polls, recursive electoral analysis,  and local party organization. Although there are are some possibilities of upsets, most notably Georgia for Clinton and New Hampshire for Trump, both candidates are clear favorites in the states indicated. The swing states shown in grey are where the bulk of advertising dollars and organizational effort will be spent by the candidates and their PACS.

Donald Trump will literally need to win every swing state in order to win the election. Hillary Clinton can afford to lose the swing states of Florida and Ohio and win just one of the swing states including Nevada or Colorado, states that President Obama won in both 2008 and 2012 and have large Latino populations.

Note - one interesting possibility does exist. If Hillary Clinton were to win all of the Blue States above plus Nevada, but lose one of Maine's two Congressional Districts presumably to Donald Trump, each candidate would have 269 electoral votes each. Maine and Nebraska are one of two states that award some of their electoral votes by Congressional District.  If the Electoral College can not decide on a President by a Majority Vote, Congress (which is Republican Controlled) will  decide who becomes President from the top three candidates.  The procedure is spelled out in the 12th Amendment to the Constitution.

Posted by Eddi Haskell at 3:49 PM No comments: