A Primer For Those Trying to Figure Out the American Electoral System -- What is the Electoral College, and Why is Florida So Important?


The two major party candidates for the Presidential Elections of the United States of America have been chosen -- Hillary Clinton for the Democratic Party, and Donald Trump for the Republican Party. The elections will be held on Tuesday, November 8 which is the first Tuesday after the first Monday in November. This date has been mandated as election day for Presidential Electors according to the Constitution of the United States since 1845.

The United States does not elect its President by majority popular vote. It elects its President by majority of votes in something called the Electoral College. I am going to try to explain to my reader exactly what the the Electoral College is, why it exists, and why it gives certain states, most notably the State of Florida, my home state, such enormous power in modern times in determining who will be elected President. This article continues in a Questions and Answers format.

1. How does the United States of America determine who is President and Vice President?

The Constitution of the United States calls for an "Electoral College" composed of individual electors who are allocated to each state according to the number of seats they have in Congress to determine who is elected President and Vice President. It is a simple arrangement that is actually a clever compromise by the framers of the Constitution 230 years ago.

Some of the delegates to the Constitutional Convention wanted a direct vote for President. Others wanted State Legislatures or Governors to decide directly. A compromise was reached in the form of an electoral college.  Each state was given the same number of electoral votes they had in Congress:

2. How big is the Electoral College?

The Electoral College currently has 538 seats.

435 seats for 435 member of the House of Representatives.

3 seats for the District of Columbia (Washington D.C.).

3. When does the Electoral College Meet?

4.  How does each state determine who its electors will vote for?

Since 1824, by law and convention, the Presidential candidates who get the majority vote of a state carry all of that state's electors. Electors names do not appear on the ballot - instead, in small print, the wording "electors pledged to" appears above the candidate's name. The party of the candidate may appear below or near the candidate's name.

Exceptions at the current time include Nebraska and Maine which award electors by Congressional district, and stateside electors (the two Senate electors) by popular vote.

Theoretically, any state can decide to award its electors by Congressional district. Republicans in the Midwestern states in particular have threatened to do this but have not done so. The pros and cons of doing this would require an analytical treatise which is beyond the scope of this blog.

5. Are electors required to vote a certain way?

No. "Faithless" electors occur. The last reported one was in 2004 in Minnesota

6. So why do certain states have so much power?

The electoral college formula means that states vote as a block (again, with the exception of the small states of Nebraska and Maine). This gives the power to the large states. All that matters is that a candidate gets 270 electoral votes.

7. Is it possible for a candidate to win the popular vote and lose the electoral college?

Yes. It has happened several times. Al Gore got more votes than George Bush in 2000.

8. Could the electoral college end up in a tie?

Yes. It is possible for two candidates to get 270 votes each. The election would be up to the House of Representatives if that were to happen. It has never happened before.

9. Which large states are reliably Republican and which Democratic?

Pennsylvania with 20 electoral votes was considered a reliable "blue" Democratic state but is considered a swing state this year.


9. Why is Florida so important?

Florida, with 29 electoral votes,  is the biggest "swing" state.  Florida has just the right mix of demographics to  reflect the national average of voters in Presidential elections.

Ohio, with 18 electoral votes, is another "swing" state in Presidential elections.

It has been impossible for the Republican Party to win a Presidential election without the State of Florida since 1924. Al Gore would have been elected President in 2000 if it were not for the Florida recount being called off by the Supreme Court of the United States.

No Republican candidate has similarly won a Presidential election without carrying Ohio.

Most analysts feel that Donald Trump will need to carry both Florida and Ohio to win the Presidency.

10 Will the United States ever adopt a direct popular vote for President.

In my opinion, not for a very long time if at all. It will require a constitutional amendment which is very hard to do, and I cannot see a state like Florida willing to give up its power in Presidential elections that quickly.


Now that Donald Trump has picked Indiana Governor Mike Pence for Vice President- a candidate whom people are calling his "least bad choice", and someone if press reports are to be believed, he tried to pull out of at the last minute.  Governor Pence, although from the crucial Midwestern region with all-important swing states of Ohio, Wisconsin, Iowa and nearby Pennsylvania comes from Indiana, a state which is reliably set to vote Republican this year anyway. Mike Pence is reliably conservative and has socially conservative credentials, which should help Trump open the pockets of right-wing financial backers.

I actually predicted brainy but big-mouthed Newt Gingrich, the former Speaker of the House for Trump's pick for Vice President. I am surprised Newt was not picked. Perhaps it was this video that recently surfaced at Red State. a conservative blog that did him in. Although Trump can deal with criticism, his children who had a leading role in vetting the Vice President do not like their father's intelligence being questioned.  My personal attitude about this is that Trump is one of the most brilliant and shrewd businessmen and marketers in American history -- perhaps only matched by P.T. Barnum, another showman who also dabbled in politics.

The question remains on who Hillary Clinton will pick as her Vice Presidential nominee. I have already predicted last month  that Clinton will chose Elizabeth Warren.  I now am not sure about this. In fact, I am cancelling my prediction.

Why am I cancelling my prediction?

1. Bernie Sanders is full-in with his support of Hillary.  He has been given the lead-in speech at the convention on Monday night. He and his supporters do not do not particularly like Elizabeth Warren it seems. They expected her to endorse Sanders and she never did. She sat the primary out and stayed "neutral" even though, to them, her policies were more in line with Sanders' than Clinton's. I actually disagree with this assessment, but this is not the the place for this argument. Putting Elizabeth Warren on the ticket will not get young progressive white voters out to the polls.

2. The 10 swing states that will decide the 2016 election that most pundits generally agree upon are listed below. They are not as liberally minded overall (and this is a value judgement) as solid Democratic New York and California. Hillary Clinton may not be willing to take a risk and put another female on her ticket.

3. According to polls, Donald Trump has alienated the Latino/Hispanic population to a great degree (and I am stating the obvious for many people). Any Vice Presidential candidate that Hillary Linton choses will find either being of Latino or Hispanic heritage or at least having Spanish fluency to be of great advantage.

4.TPP:  President Obama is for the TPP (Trans Pacific Partnership).  Elizabeth Warren is against it. Hillary Clinton has come out against it in its current form. The Democratic Convention will need to keep support in its platform for one reason --  it cannot put egg on the face of a sitting President, and not one that is popular and loved as President Obama. It is that simple. Party platforms are statements of principal, but Elizabeth Warren, by making it known that her principles will come before raw party practicality, has effectively taken herself out of the race last week by fighting against the TPP in the party platform. Hillary Clinton cannot have a split  with President Obama on the eve of his last convention by opposing what he sees as one of his signature achievements.

I now predict Virginia Senator Tim Kaine, who speaks perfect Spanish, and is a close confident of the Clintons will be the Democratic VP choice. He is also from Virginia which is a key swing state.

Saying that, my track record of late - predicting that the U.K. will vote against Brexit and predicting Newt Gingrich will be Republican V.P. is wrong, so if I were you , I would not bet on it!

Hillary Clinton's choice should be known next Friday, July 22.

Reality Check: Donald Trump's Odd's Are Much Better Than 20% 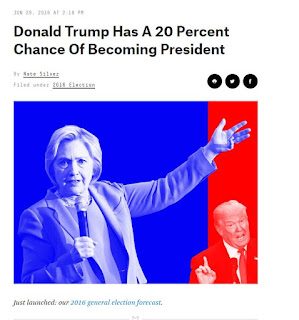 Nate Silver at the highly respected 538 blog does not think much of Donald Trump's chances of becoming President. On June 29, he projected Trump's chances at 20%. The last I checked he raised them slightly to 23%.  However, he still favors Clinton by a wide margin.

I think Trump's chances are much higher than this.

The real campaign will kick off after Labor Day on September 1. But 20%?  Don't believe it!
Posted by Eddi Haskell at 12:04 AM No comments:

Both candidates are over 70 years old. If my prediction is correct, this would be the oldest ticket in American history.

Posted by Eddi Haskell at 7:30 PM No comments: