My Prediction: Biden/Harris Win In a Landslide

My Prediction for the election tomorrow: 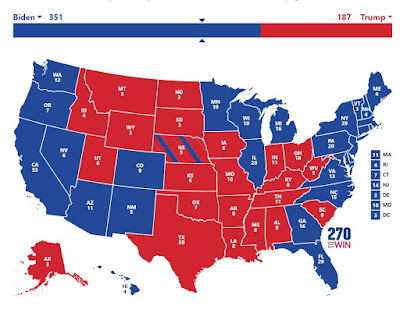 Biden/Harris in an electoral college landslide:  351 votes to 187 for Trump/Pence

Posted by Eddi Haskell at 2:01 PM No comments: 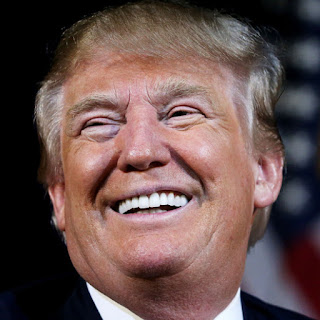 As of today, President Trump is headed for reelection in 2020.  Here are 5 Key Reasons Why:

1. The economy is booming:

The economy of the United States is booming. Unemployment is at a 49 year low of 3.6%. Although claims can be made that the economy is overheated, and fueled by unsustainable tax cuts, inflation is still under control. Americans may need to see evidence of a recession to replace their commander in chief.

2. The Democratic Party remains split between progressive and moderate wings moving into the 2020 race. Divisions that cost it the 2016 Presidential Election show no signs of healing.

Moderate and Progressive Democrats do not like each other. The moderate, established wing of the Democratic Party, represented by Speaker Nancy Pelosi, former Vice President and leading 2020 Presidential Candidate Joe Biden are at odds with Democratic Socialists Bernie Sanders and newly powerful New York City Congresswoman Alexandria Ocasio-Cortez. Unless a Presidential Ticket is able to unite the two sparring wings of the party, it will head down into defeat.

Although more Americans disapprove than approve of Trump, his approval ratings are a solid 40%. He is the most popular Republican president since Ronald Reagan. Republican voters are older and more likely to vote than their Democratic counterparts.  And, as any good military tactician knows, a smaller striking force can easily defeat two opposing wings of an opposing army.

4. The United States is not fighting a land-based war of any large magnitude for the first time in decades.

Under President Trump, the United States has cut down its international military operations involving land based forces to a massive degree. Americans like weekly news reports which do not show young American soldiers returning home in body bags.

5. Built in advantages such as the electoral college, and voting suppression laws, continue to favor Republican dominance in Presidential elections.

Although the Democratic Party candidate in 2000 (Al Gore) and 2016 (Hillary Clinton) received more popular votes than their Republican counterpart, the Republican candidate won because of the arcane Electoral College, which can only be eliminated by Constitutional Amendment or an informal pact between the states. Not only that, laws which suppress minority turnout remain on the books in key swing states including Florida, North Carolina, Georgia, and Arizona.   The Democratic Party will continue to lose close elections unless these obstacles are overcome.
Posted by Eddi Haskell at 4:05 PM No comments: